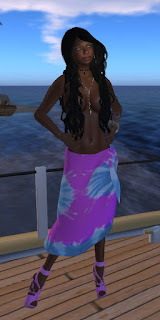 As I just posted, not a big fan of mesh bodies yet.  But I am becoming a guarded fan of mesh hair.  Don't get me wrong, I love the bouncy flexie hair.  But the tendency of long prim hair, flexie of otherwise, to interpenetrate one's avatar body was off putting to me.  The new mesh hair does not do this, because it retains the same location respective to your avatar's "skeleton".

This has some odd side effects of its own, but in general for really long hair I prefer this effect to the standard prim hair effect.  I recently happened to see some hair that covered an avatars chesty bits rather effectively and decided I wanted some.  So, I managed to track down the the vendor.  Sadly, I missed the budget 99L hair in this style when exploring the shop, at least until after I'd purchased the hair shown below.  But that hair is in multiple colors and I think looks a tad better than the promotional hair.  Regardless, you might want to visit Catwa if you like this sort of look.

Also shown, me in the same hair riding the roomba around at Club Stiletto.  Why?  I ask, why not!? 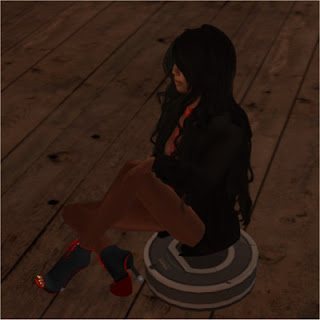 Posted by Lee Serrao at 5:31 PM No comments:

A while back I visited the Medieval Faire event for The Relay For Life charity.  Sad to say by the time I've gotten around to posting this, it is long past.  But it was quite fun to visit.  In addition to the typical booths full of goodies you can buy to help the charity, there were events, and individual activities.  I spent quite a lot of time trying my skills at the archery range, but sadly, I never got close to cracking the scores of the top 20 shooters.  Apparently my skills in SL don't match up with my skills in RL.  Anyway, below is an image of me attending the event in elf gear.  I would urge to visit any future Relay for Life Events.  They are always fun to explore and the benefits go to a worthy cause. 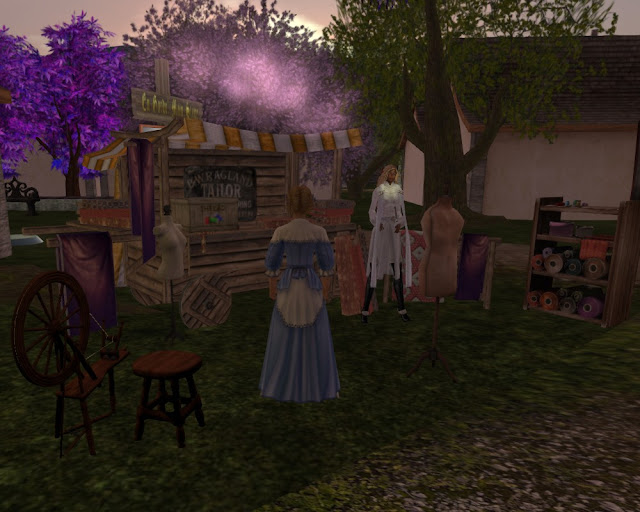 Posted by Lee Serrao at 5:22 PM No comments: 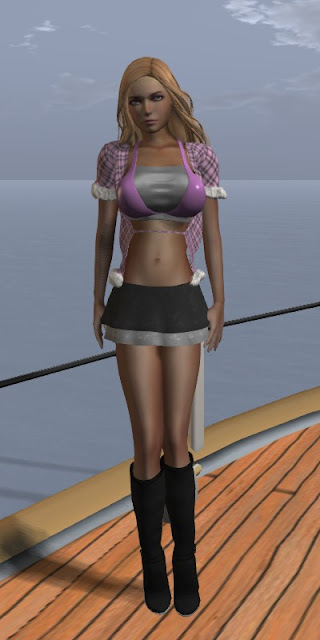 I've become a fan of mesh clothes, for the most part anyway.  And to some extent, mesh hair.  But I'm not sure mesh bodies are quite ready for the prime time.  First of all, they need to work with mesh clothing makers to fit standards.  I'm not going to tie myself to a single builder for every piece of clothing. Also, there is the issue with everyone not only being shaped the same, but also having pretty much the same small set of faces.  I have seen some mesh bodies that allow you to keep using your system head, so you can still look like you from the neck up, but I don't think that is the final, or best solution.

Never the less, I decided to explore the options and tried out some free and low priced mesh bodies, at under 400L for several shapes, skin tones, clothing, SDK and two different mesh heads.  It is possible I would be more impressed with the expensive ones, but in my experience in SL, once you achieve a certain level, price becomes as much a mater of prestige as of practical benefit.  With that in mind I purchased a modestly expensive mesh body that came with an SDK allowing you to modify the skin and a small set of clothing.  This was in addition to several different shapes. Even one that was ostensibly male, though I would more accurately describe it as flat chested with booty. Over all, I found the new mesh body interesting, even attractive in some ways.  I tried out the rather chesty "D Cup" version of the shape, and I will tell you this, it attracts horny men much more than my usual small or flat androgynous shape.

The builder also sells several sets of clothing in various fashions for between 10-50L.  So clothing for this avatar is not expensive.  But the avatar does not fit standard mesh clothes.  So the wardrobe is limited.  On a happy note, prim and mesh hair, and shoes, work fine with it.

The image included here is of me wearing the D cup shape, included clothing, mesh hair from another vendor and prim boots from ADN.  The picture is as usual taken at Pair A Dice.
Posted by Lee Serrao at 5:16 PM No comments:

I know it has a been a long time since my last posting, but RL has been a bitch.  So, with few visits to SL and not lot of energy for extraneous stuff I just haven't had anything I felt worthy.  But that is changing.  So, soon, you should be seeing more from me here.

In the mean time, I hope you've been having a good pair of lives.

Posted by Lee Serrao at 3:24 PM No comments:

The old and the new.

Grumble is having a promotion for the Twelve Days of Christmas, you can read about it here.  The first day's gift is a cute little mesh cropped sweater top in royal blue. You can see it here, along with some system clothing layer jeans, and a pair of sculptie "pedicure" shoes, also from Grumble in days past.  All displayed on the deck of a sailing yacht just off the shore of Pair A Dice.  It's a great little outfit to start off the holidays in don't you think?  So, here's to hoping you have a wonderful holiday season, in both lives.

This is my 200th posting.
To celebrate here's a kitty, and a candle. 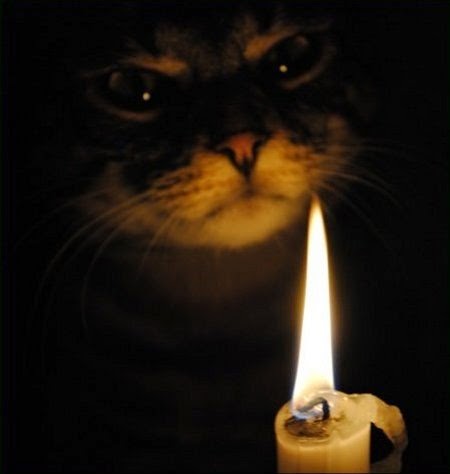 Prissy goes prancing down the runway.

My friend Prissy was a model in a fashion show at Velvet Crossing today.  The designer was Anda Panda, who specializes in Sissy and Domme styles.  The show was well attended and I must say the looks were actually pretty nice.  I'm sorry to say I was crashing too much to get all the snapshots I would like.  But I did manage to get a couple of nice shots.  Here's a wide shot of the models lined up after their runway walk, and Prissy doing her prance. 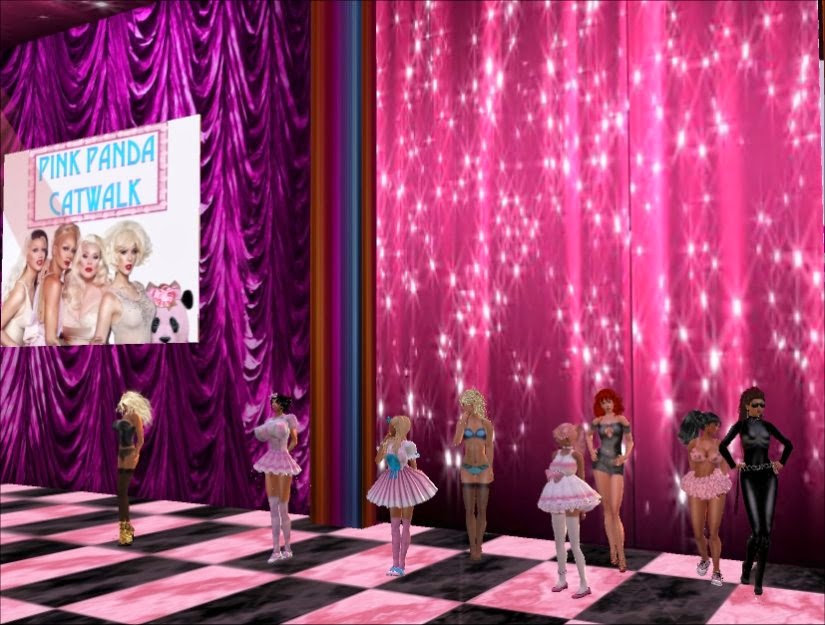 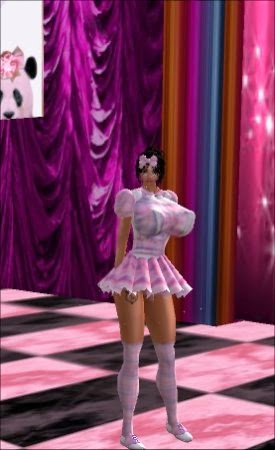 Sixty one and done.

I was planning on doing two outfits per day for November, to showcase how many different looks one can achieve with just a few lindens.  My intention was for each outfit to be essentially new, never having been posted in my blog before.  So, that would be sixty outfits.  But then I realized I'd pretty much put the outfit #3 on November 24th in my blog ages ago.  You can see it here.  The hair in the new outfit was some new mesh hair, but the outfit was otherwise the same.

So, I've done five more outfits.  Shown below are five looks that incorporate things new and things old, and all cost me nothing to speak of.  Though the apron in number five was a gift, it is not an expensive item coming it at only 60.  Which considering it has several textures included seems a bargain to me.  So, consider my point made.  That with a little effort and not a lot of $L, you can have a well stocked closet of nice clothes for any occasion.  The locations for all the snapshots are at Pair A Dice, except #3, that one was taken at Femboy On Bottom's naughty rooms, which just happen to have a nice Japanese theme.

Here's the customary listing of items featured above:

As a special note, the leg warmer heels in #2 are those new style shoes that require you have a specific version of mesh feet from Slink.  Frankly, while the slink feet do look nice, I don't like this trend.  Not everyone wants to pop 600L for a pair of feet.  Especially since there are three different kinds, flat, mid and high.

But in this case, I was able to wear those shoes with mesh feet from Belle Dejour.  And how much did they cost?  Nothing.  If you join Belle's group, she sends out a gift package every few months.  And it's chock full of goodies, many of them adult, but some are like these nice mesh feet.
Posted by Lee Serrao at 8:11 PM No comments:

Like most Americans I have a holiday around Thanksgiving.  But between a hand injury, illness, cooking for the holiday and the holiday itself, I haven't been in SL too much.  None the less, I've made it on a couple of times briefly to continue to rack up outfits to post here.  Below are outfits 49 to 56 counting from the 1st of November. Other than the B@R outfit, they are all centered on items that were obtained via some sort of promotion at little or no cost.  The Hatter outfit is one I've had for a very long time, came in three colors and cost about 150L. That outfit's snapshot was taken at the Rose Theater.  The green and white sweater dress snapshot was made at Somewhere Near Aspen.  All the others were done at Pair A Dice. 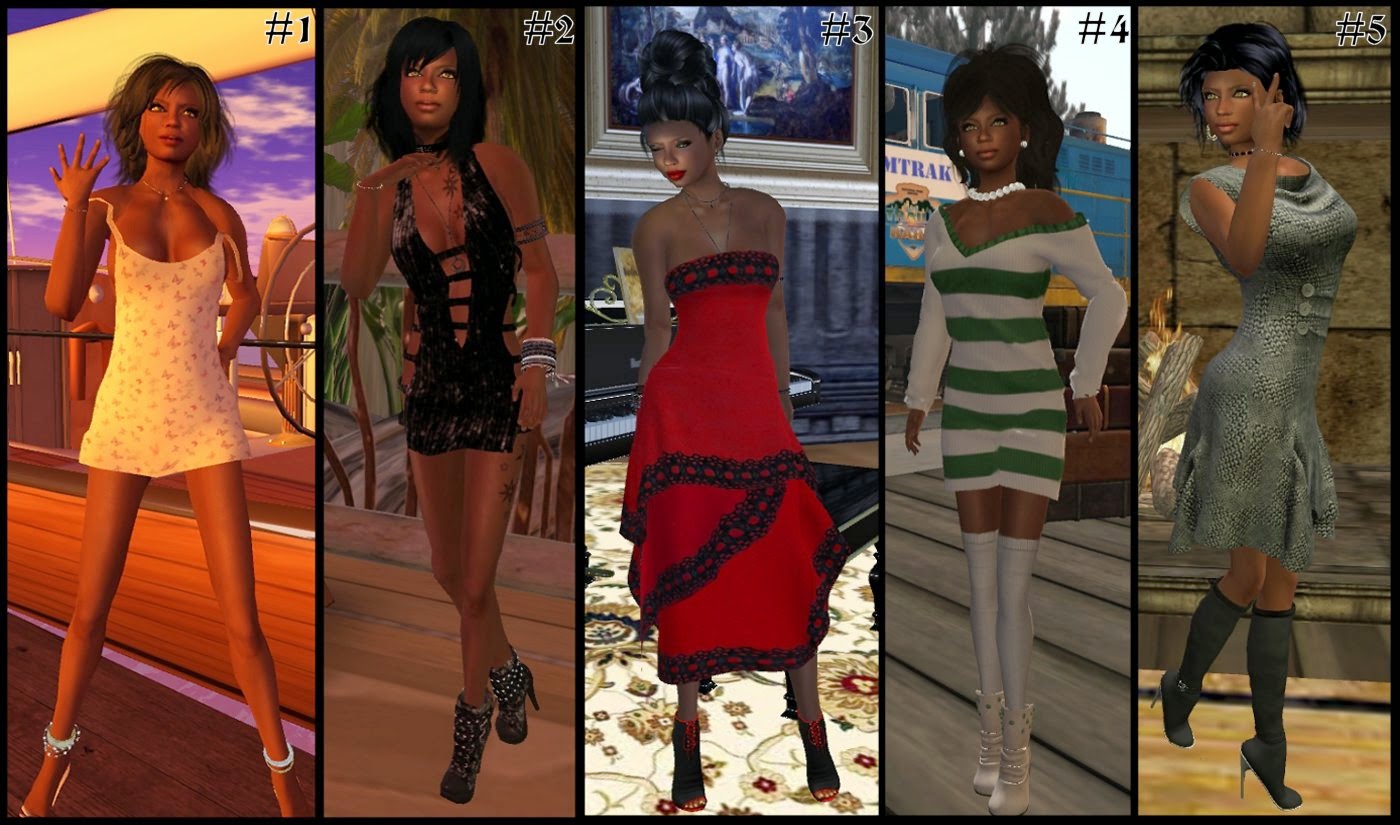 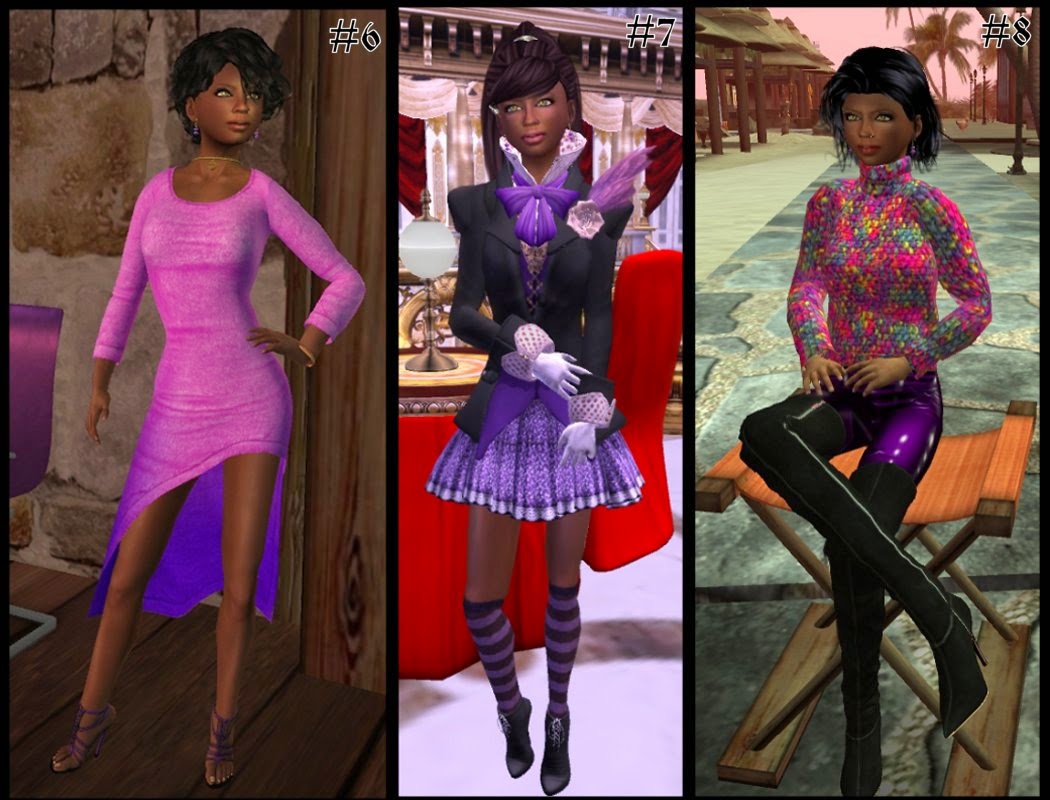 The breakdown of what items are from where is as follows:
Posted by Lee Serrao at 4:57 AM No comments:

I've been feeling a bit under the weather lately.  So I did not make up new outfits from items I already have.  Or, find new items to build outfits around.  Instead, I just looked through my saved outfit folder and took some snapshots of five outfits I have not posted here before.  Parts of these outfits have shown up in other posts in some cases.  These outfits are the 44th to 48th posted since November 1st. 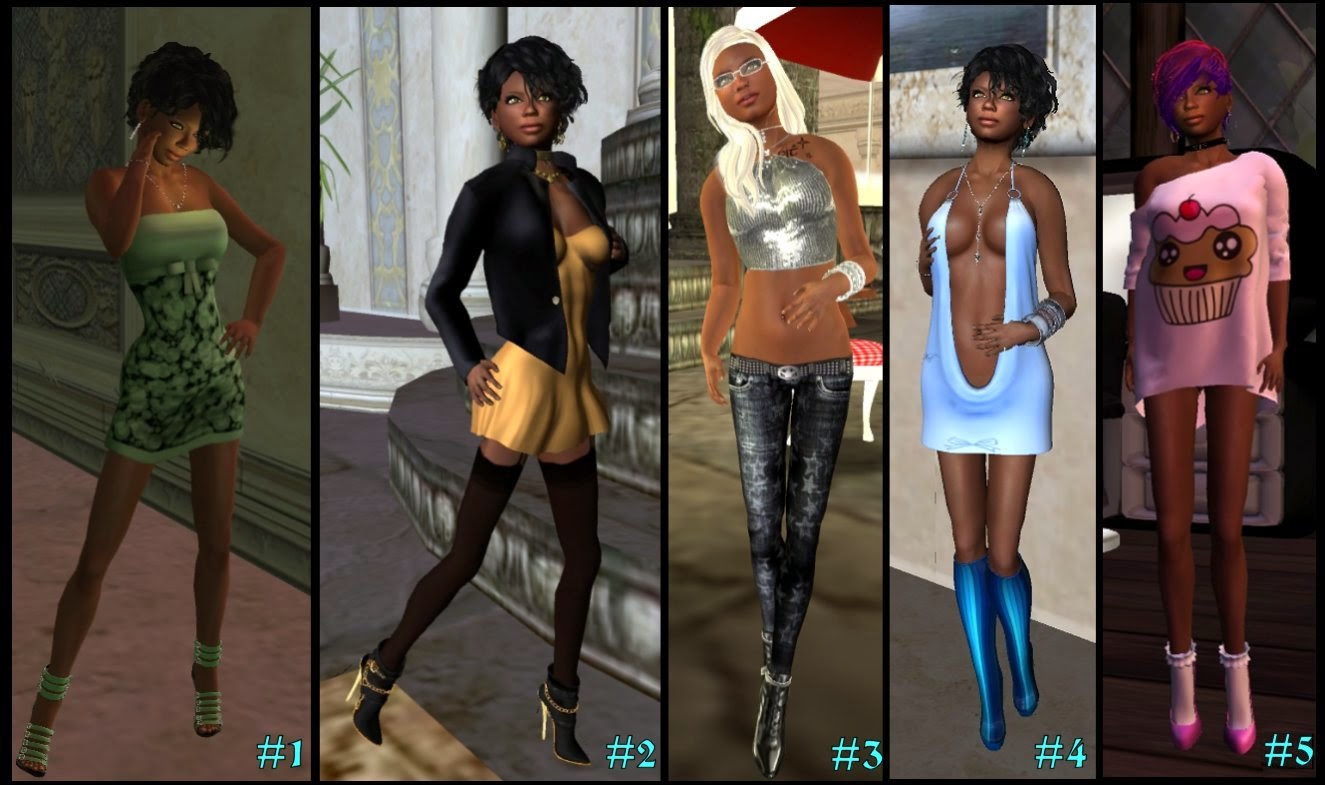 Posted by Lee Serrao at 3:24 AM No comments:

I was thinking sweaters tonight, it's still very cold where I am in RL.  So I went through my outfits and found some looks that incorporated sweaters.  As I was looking those over, I found two other rather sporty looks I decided to post tonight as well.  All snapshots were taken at Pair A Dice.

I did pay more than 1L for some of these items.  But most were 1L or less, many were purchased using gift cards won or acquired in various ways.  But the largest out of pocket purchase for clothing was the cropped sweater from Razor Blade Jacket, it was only 150L.  I did pay around 600L for the platform boots I'm wearing with the oversized skull decorated sweater.  But that was a long time ago.  I've never again spent that much on a pair of shoes!

At this point I'm thinking I'll probably stop doing this when I hit sixty outfits.  I hope to do that before the end of this month.  The point?  Just that without spending much by way of $L, you can still create a large number of outfits in SL.  And that with what I've collected, I could easily wear a different outfit every day till the end of 2014.  It is more than likely, that if I bought nothing more, I could wear a different outfit every time I log in till the end of 2015.  Though some of them would probably be less than awesome. 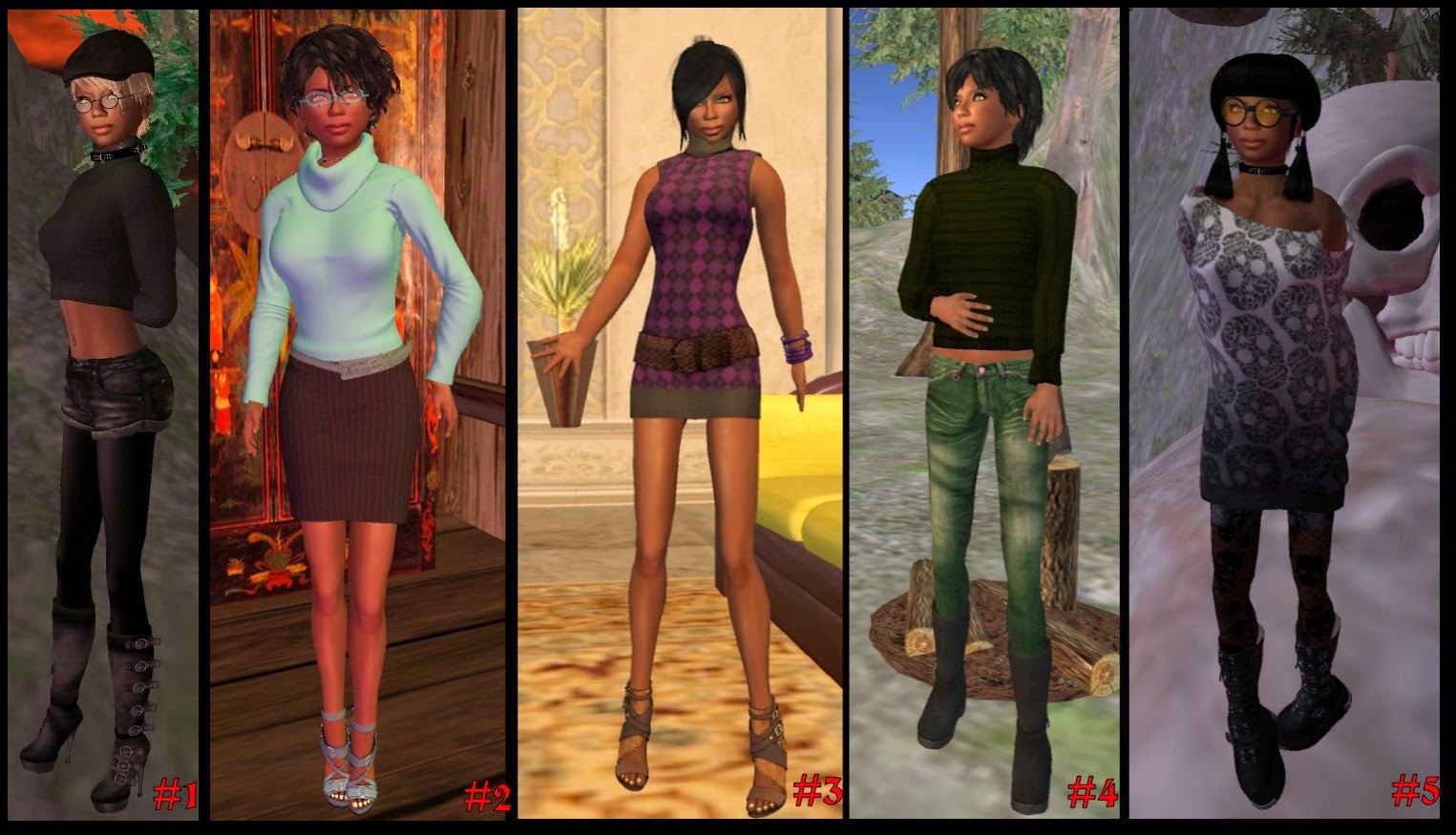 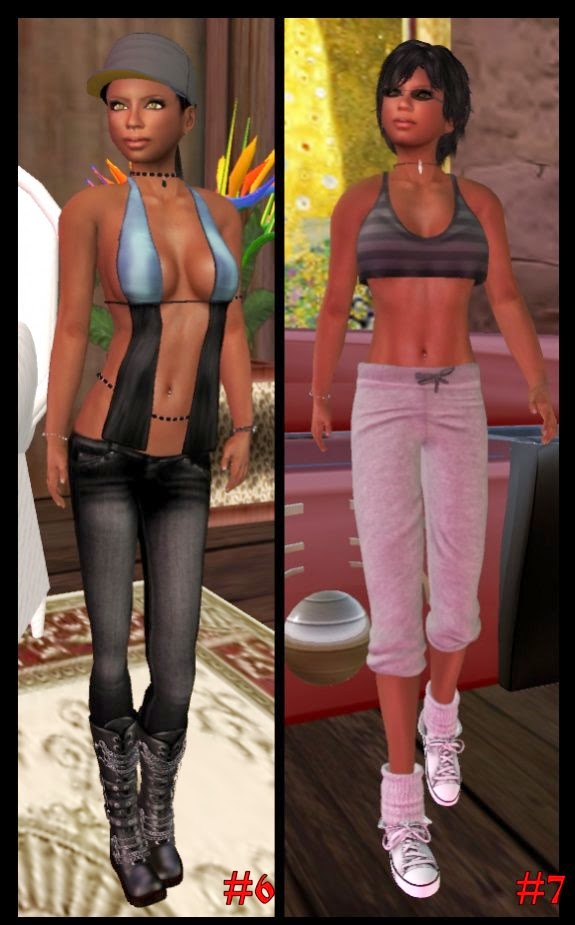 Seven more looks makes from the 37th to 43rd outfits posted since November 1st.
Posted by Lee Serrao at 12:00 AM No comments: